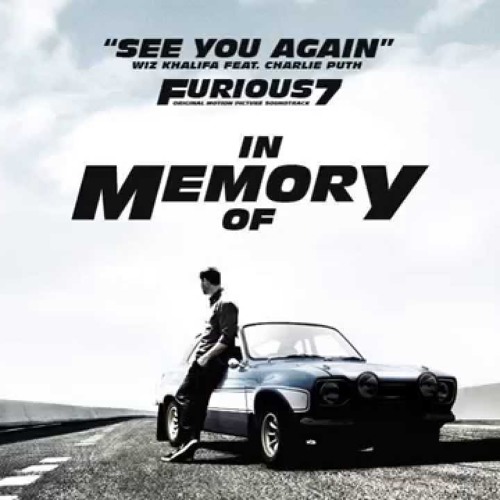 Syllaka – Following the success of Furious 7, The Song See You Again was a hit back in 2015, even ranked first in Billboard’s Flagship Hot 100 Chart and in more than a dozen countries all over the world. And even after three years, this track is certified Diamond by Atlantic Records sang by Wiz Khalifa and Charlie Puth.

With the sales of 10.3 million units, is more than enough to prove that Wiz Khalifa and Charlie Puth are now a Superstar. See You Again continues to break the Spotify records as the most streamed track in a single day which is 4.2 million streams, and 21.9 Million streams in a single week. Quickly became a sensational phenomenon and reached the first rank on the Itunes store TOP Songs. Even today, it has 5.5 Billion views on youtube and put the “ Gangnam Style ” to sleep, although the fact that See You Again didn’t put any of Bizarre Dances, yet it succeeded to break the cultural barriers and even attracts The Elites all over the globe.

While The songs itself were backed up with The Death of Paul Walker back in 2013, and the hit movie of Furious 7, The Song itself were written and produced by the newcomer Charlie Puth and his Colleagues. This means that Charlie Puth back in the day already had a quality of Superstar since his early days.

Another facts that helped “See You Again” is the MV itself (Vevo) has a whapping 3 million views per day in 2017 on youtube, Vevo has an recommendation algorithms that helped this song to be viewed even more. While youtube’s autoplay resulted in more MV plays per session, The advancement of messaging apps also helped 7 Million discovery and Sharing.